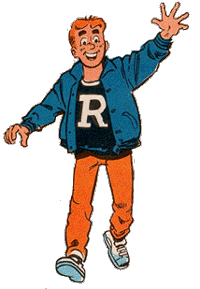 Gosh, you oughta know better than to whistle in school, Jug!

Archie is the average American teenage boy, with an average mom and dad living in the average town of Riverdale. The difference is, Archie has two girlfriends! What's more, they're always fighting over him. He is forever caught in a love triangle between the sweet girl next door, Betty, and the uber rich girl in the mansion, Veronica. He's always juggling the two girls, which keeps him in endless trouble! He's clean cut, well-mannered, and well-meaning, but is extremely impulsive and easily distracted. He brings home average grades, and plays on the school sports teams. He has had assorted part-time jobs to earn date money.

His ability in sports is unknown. Various stories refer him as being extremely athletic to the point of his team relying on him to win a game, while in contrast several other stories portray him as having poor athletic ability. Archie manages to bring the score in a baseball game from 0-27 to 26-27 in just the one inning in which he pitches. Several stories begin with Archie portrayed as the star QB but unable to play due to an injury. In such cases he usually helps his team from the sidelines. For example in a football game he makes Jinx Malloy sit on the opponents side of the stands, thus causing a series of unfortunate accidents which eventually lead to Riverdale's victory. His ability in soccer is excellent though he failed the tryouts as he slipped on the first shot and was immediately rejected. His surfing ability is also portrayed in the same manner adapting according to the story ranging from "clueless surfer" to winning a surfing tournament.