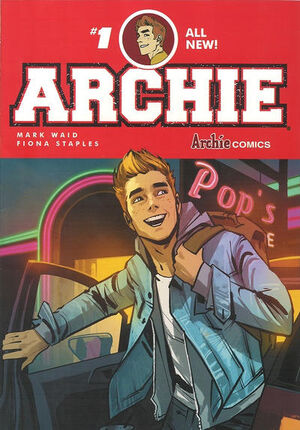 Hi. My name is Archie Andrews. Welcome to Riverdale.

Chapter One: There is This Girl

Archie Andrews introduces himself. He tells how he and Betty Cooper had been a couple since kindergarten but broke up last week over the "lipstick incident", which he doesn't elaborate on. Some classmates (Kevin Keller, Sheila Wu, and Maria Rodriguez) try bribing his friend, Jughead, with food, but he also refuses to talk.

Chapter Two: I Be a Genius

The students interrogate Betty about the lipstick incident, but she doesn't talk either. Reggie Mantle, Riverdale's resident jerk, hits on Betty. Kevin, Sheila, and Maria come up with a plan to convince the student body to vote for Archie and Betty as Homecoming King and Queen. Jughead has volunteered to count the ballots, and asks Sheila for a tube of crazy glue for an unknown reason.

Archie heads to the Homecoming dance to perform a sound check for the band. However, the lead guitarist is missing, so Archie is called to take his place (it's later revealed that Jughead crazy-glued the guitarist's hands to his steering wheel). Mr. Weatherbee announces the Homecoming Queen and King: Betty Cooper and Trevor Smith. The others question Jughead about this, but he shrugs; he notes that forcing the two together in such a public way probably wasn't a good idea (it's showed that he disposed of most of Archie's ballots to prevent this). Afterwards, Archie walks home, passing a billboard for Lodge Industries as he muses that a new girl just might be around the corner...

Retrieved from "https://archiecomics.fandom.com/wiki/Archie_Vol_2_Issue_1?oldid=17277"
Community content is available under CC-BY-SA unless otherwise noted.