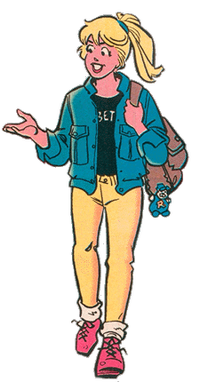 Elizabeth "Betty" Cooper is portrayed as a nice, beautiful, smart, sweet, tomboyish and funny girl with blonde hair. Her eyes are typically described as blue, but are only drawn as such in later years and during close-up shots of her face; at all other times, her eyes are simply drawn with black ink.

The quintessential 17-year-old girl next door, Betty's middle class upbringing is a world apart from the flashy lifestyle of her wealthy friend and rival, Veronica Lodge. Nowhere is this more evident than when she and Veronica are competing for Archie Andrews' heart, and yet they remain best friends (Veronica once told Archie that she and Betty are only rivals in unimportant matters...like boys.)

In the late 1960s, the two girls joined Archie's band, a garage band appropriately named The Archies. Both sang (usually backup), and Betty played tambourine, while Veronica played organ. This implies that Veronica is more musically talented, but this is not necessarily true. Some stories indicate that Betty is the better vocalist. Additionally, there is little consistency in the instruments she is able to play. Betty has played the recorder, tambourine, maracas, guitar, banjo, keyboard, saxophone, cello, and the bongos.

Betty's hobbies include sports (including baseball), cooking, and making her own clothing. She loves fashion and driving around the block. Betty is a scuba diver wearing a red shorty wetsuit, breathing with a scuba tank she carries on her back and a regulator in her mouth, wears red flippers on her feet and a mask on her face, but she swims underwater. Betty has a talent with animals (she owns a cat, Caramel) and often operates small businesses concerning them no matter how troubling they turn out. She is very concerned with the environment and other social issues and encourages the rest of the gang to clean up after themselves. She keeps a small garden in her backyard, to which she tends occasionally. She loves children and sometimes babysits Jellybean with Jughead as well as other children in Riverdale. Occasionally, families hire Betty to keep their elderly members company.

Contrary to the "dumb blonde" stereotype and despite her beauty, Betty actually has an above-average intelligence and is one of the smartest students at Riverdale High School. In one story she won an award and was sent to compete in New York and has won numerous academic awards. At one point, she gained ESP when an encyclopedia accidentally fell on her head. This ability took away all hope for the future; Archie asked her for a date, but she knew that Archie would dump her for Veronica. She lost her ESP power when a ball that Reggie kicked accidentally hit her; in her gratefulness, she gave him a thankful kiss.

Betty's best friend is Veronica. Although the two are often involved in disputes over Archie or something else that evokes jealousy, they have remained the best of friends since their childhood. The two have commented that Jughead's and Archie's friendship could not compare to theirs. In many stories, Betty and Veronica team up or help each other despite jealousy and competitiveness. Betty's other female friends include Ethel Muggs, Midge Klump, and Nancy Woods, all of whom share common interests and group activities such as shopping and cheerleading.

Frequently, Betty has been shown to date Reggie Mantle early on in the titles' runs and occasionally still, more often than not as a casual date when Veronica has Archie take her out. Sometimes, Reggie and Betty are seen to be flirting with each other; when Betty is feeling sad, Reggie always tells her that she has won a date with the most handsome man in the world. Although Reggie does not appear to admit it, he seems to genuinely love Betty, but his self-image sometimes is more important. In the Life with Archie magazines that depict a future timeline in which Archie marries Veronica, Betty and Reggie are portrayed as a loving couple.

Betty's relationship with Jughead Jones has mostly been that of close confidant and close friend, as they normally discuss their issues more candidly with each other than anyone else; Jughead will provide commentary on her feelings for Archie, and Betty will attempt to "better" Jughead, by getting rid of his slothful attitude and laziness. Once when she had a sprained ankle, Veronica told both Archie and Jughead to visit her. The four of them were having dinner together when people from the school mistook Jughead as Betty's boyfriend because he was carrying chocolates to her house. Jughead appears to care more about Betty than other girls and there have been hints of a potential romantic relationship between them. In one story, Jughead even says that if the time ever comes that he would willingly kiss a girl, it would be Betty. A happy tear is seen sliding down Betty's face at this comment.

She had a friendship with an elderly woman named Lydia Wyndham, whom she found when doing research about World War I. With this acquaintance Betty got to know an accomplished writer and poet with a sharp mind (and a sad past—Betty's research had turned up a beau of Ms. Wyndham's who was killed in combat), but after a while Ms. Wyndham herself died.

At times, Betty gets jealous or even angry at Cheryl Blossom for flirting with Archie, even though Cheryl Blossom is friends with Betty. However, Betty and Veronica often unite against Cheryl when she tries to lure Archie away so he doesn't cheat on Betty. Jason Blossom, Cheryl's twin brother, has genuine interest towards Betty instead of the popular Veronica, which makes Archie jealous. But Cheryl, being one of Betty's best friends tells her that sometimes her brother is not good for her. Betty, always seeing other people's good side, chooses to date Archie Again.

Betty had a relationship going on with Adam Chisholm. It was thought by some people that Betty had chosen Adam over Archie. This event made Archie jealous and he concentrated his attention to Betty, ignoring Veronica, if he thought there was a chance that Adam might take Betty away from him. Though in actuality, Adam has rarely been seen in the last couple of years, and Betty has always been shown to prefer Archie.

Betty enjoys writing and keeps a diary that is featured in the miniseries Betty's Diary. She wants to be a famous writer someday, an aspiration that her teacher Ms. Grundy approves of. She submits her work to writing magazines and has been published a number of times. At the same time, she takes various types of employment, including some work as a mechanic, which is also a career that she is interested in.

In some stories she finds employment as an assistant teacher at the local elementary school. In the TV movie Archie: To Riverdale and Back Again, and a comic book based on it, the characters are depicted as adults 15 years after their high school graduation. Betty is shown to be an elementary school teacher and aspiring novelist, engaged to a jerk named Robert, who is jealous of Archie. In the end, she breaks up with Robert, and switches to teaching at Riverdale High.

In the Life with Archie series: Archie Marries Veronica, Betty runs a catering business with Reggie though it is somewhat of a front for a reality show starring both of them, and in Archie Marries Betty, She is a teacher at Riverdale High. However, in both universes, Betty was a buyer for Saks Fifth Avenue in New York.