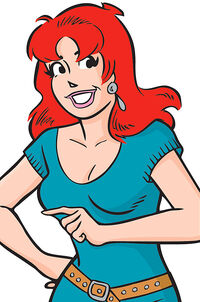 Cheryl Blossom was introduced in 1982 in Betty and Veronica #320[1] as a third love interest for Archie Andrews, but she and her brother Jason disappeared two years later. One of the reasons she disappeared at first was because she was deemed too sexual for a children's comic.[2]

In the 1980s, when a number of alternate universe series were published, Cheryl was a minor recurring character in the short-lived title Archie's Explorers of the Unknown. She appeared as Blaze Blossom and would brief the Explorers on their missions.

The character was eventually reintroduced in the main continuity and back into Archie Andrews' life during the "Love Showdown" four-part series in 1994. During the series, Archie receives a letter from Cheryl which states she will be returning to Riverdale. Archie, infatuated with girls as always, decides to keep Cheryl's return a secret from Betty Cooper and Veronica Lodge. He merely acts in a typical Archie girl crush maneuver (looking dreamy, uttering nonsense). Unknown to Archie is that Betty and Veronica both think the other person did this to Archie, and they declare war on each other to win back Archie once and for all. Super Soakers, dirty dancing, and fraud are just some of the tactics that the girls use on each other. Cheryl returns to Riverdale, leaving readers wondering whom Archie will choose in the end.[3]

Cheryl has appeared in several comic book stories over the years and has even enjoyed her own series. In one story, it was revealed that an ancestor of Archie once fell in love with an ancestor of Cheryl's back in Scotland. In another story, she decides to join a band titled "The Sugar Girls", (a spoof of the popular band "The Spice Girls") because Ginger Sugar had quit the group. In most stories, Cheryl behaves in a way that reflects her wealth and upbringing. She is very proud of her wealth and occasionally squabbles with Veronica over who leads the more extravagant lifestyle. She can be selfish and manipulative, sometimes plotting to lure Archie away from Betty and Veronica. There are stories where Cheryl is rude and condescending to the Riverdale "townies," and sometimes only appearing as an antagonist to Betty and Veronica. Other times, particularly in the stories in her eponymous series, Cheryl can be kind and caring. She cares for her dog, a Pomeranian named Sugar, and rescues animals in need.[4] In stories featuring Betty, Veronica, and Cheryl, Cheryl is usually the most adventurous or inventive. Cheryl is popular within her Pembrooke crowd and popular with the boys in Riverdale, but loathed by most of the girls for her flirtatious nature and attractiveness.

In Archie & Friends #145, it is revealed in the end that Cheryl and her brother Jason, tell the Gang that they are officially at the age of 18.

Cheryl has a twin brother, Jason, an arrogant rival of Archie. Jason is smitten with Betty, despite claiming that he only dates rich girls. Cheryl has never complained about his choice of girls. She often shows full support towards her brother, although sometimes, she warns Betty about Jason's womanizing behaviour.

At one point, in the story "Undercover Blossom", Cheryl decided that she would try to get into Riverdale High under false pretenses. She chose the moniker, "Shirley Merriwether" and at first, nobody thought anything amiss, until she decides to cause trouble, (i.e., sending fake love letters; and stealing a couple of term papers) and then she'd frame Archie for it, almost turning his friends against him. She had almost succeeded in destroying their friendship forever, but was thwarted when Mr. Weatherbee discovered her fraudulent enrollment papers. At a dance, the following evening, Cheryl's parents, who had been informed of her deceit by Mr. Weatherbee, exposed the entire scam to Cheryl's embarrassment. Her punishment was that she would attend Riverdale High. Her parents thought that since she got in by less than honest means, she would stay there and finish out her school year there.[6]

Betty became Cheryl's best friend in the three-part story "Friendly Fire" in an issue of Cheryl's title series after Veronica humiliated Cheryl on Betty and Veronica's local Public-access television cable TV show, which alienated Betty from Veronica. Veronica, for no other reason than missing Betty's friendship, eventually very publicly apologized to Cheryl, winning back Betty's friendship in the process. Cheryl was shown to still be friends with Betty in a later issue, inviting Betty over to her house. It is unclear how much Archie writers other than Holly Golightly (the writer of "Friendly Fire") portrayed Betty and Cheryl as friends, but a story in Archie & Friends in early 2006 involves Betty suggesting that she, Veronica, and Cheryl go to Pop Tate's Chock'lit Shoppe and hang out. Veronica and Cheryl accept and walk off with Betty, indicating that Betty and Cheryl are still close friends.

In the late 1990s, Cheryl began dating Dilton Doiley. They were paired together online, without knowing each other's true identity, fell in love, met in real life, and decided to continue their romantic relationship, though this was largely ignored in later stories.

At one point, Reggie and Cheryl started dating because they both had devilish minds and were very alike. Their relationship was unsuccessful, so Cheryl appeared on a dating show. In a reader-poll event, Archie Comics finally gave Cheryl a new boyfriend, with readers voting on the potential boyfriends featured on the show: blond-haired fitness-guru Austin, dark-complected computer genius Brandon, and shaved-headed gourmet chef George. The winner of the 'contest' was George.

Cheryl and Jason lived in the neighboring, upscale community of Pembrooke during her second stay in the comic books, which lasted until the quiet cancellation of her title series and her subsequent move to Paris, France. However, Cheryl was soon brought back by popular demand from her fans. Cheryl now lives in Riverdale, and no longer attends Pembrooke, although in some stories she and her brother return to visit friends there. (After her family almost lost all their wealth in one story, the Blossom family decide to make their son and daughter attend Riverdale High for the same reasons that the Lodge family make Veronica attend public school instead of private school.)

Pembrooke Academy's athletics were not above using unfair tactics such as sabotage to win a competition. In many stories that feature a rivalry between Riverdale and Pembrooke, Pembrooke often loses despite their attempts to cheat to victory, or the two teams decide to come to a truce.

In 2010, Cheryl Blossom made a guest appearance in the first issue of the revival series, Life with Archie. She was seen as a washed-up actress waiting tables in Los Angeles. It was revealed that her parents cut her off financially because they disapproved of her moving there to become an actress. Her brother, Jason, was revealed to be working for Mr. Lodge.[7]

Cheryl will return to Life with Archie in issue 21, due to hit stores in July 2012. In this issue, Cheryl returns to Riverdale; however, unknown to her family and friends back home, she was being treated for breast cancer. Part of this storyline will feature an underlying issue on the affordability of, and the right to, healthcare.[8][9]

Retrieved from "https://archiecomics.fandom.com/wiki/Cheryl_Blossom?oldid=16973"
Community content is available under CC-BY-SA unless otherwise noted.