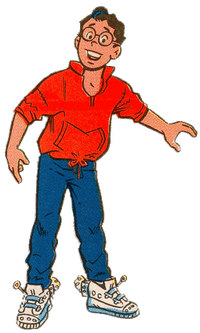 He carries with him all the stereotypical nerdy teen attributes. He is very studious, interested in all academic subjects especially science, speaks high flown language, wears glasses, and is shorter than his friends. It is also stated that he has an IQ of 198 when Archie and the gang all take part in a class IQ test. Yet while he is not particularly interested in dating, he is widely admired by Archie and the gang. Dilton uses his garage as a science laboratory. He is a skilled amateur inventor, but many of his creations do not work out as planned. His intelligence has also won him numerous science awards, and his teachers, particularly Professor Flutesnoot, are very proud of his achievements.

Though Dilton often spends much of his time in his lab, he has a secret ambition to be a Riverdale High athlete. Coach Kleats rarely has confidence in him, so Dilton more commonly ends up showing his school spirit by wearing the team mascot costume. However, he has been shown to be able to use his mathematical ability to pitch baseballs like a professional, and in one story, the new cross-country coach claimed Dilton was a natural distance runner. Even when he is relegated to being Riverdale High's baseball team scorekeeper, he is still a valuable asset even though he once disappointed a girl interested in him who thought he was a regular player. This happened when he noticed that a team winning against Riverdale had committed a batting out of turn error, told Coach Kleats, who then informed the umpire as required in the rules for a judgement and the umpire declared the offending player was out, which allowed Riverdale to win with the opportunity.

Dilton's parents appear from time to time, but almost never play a significant role. Both are typically depicted as dark haired and bespectacled like their son. His mother who is both proud of and perplexed at her son's inventiveness, appears more often than his father. Like the teenaged characters, many of Dilton's relatives were simply created for one particular story and were never seen again.

In one story in the 1970s, it was revealed that Mr. Doiley is actually Dilton's stepfather. None of Dilton's friends know this except for Chuck Clayton. Dilton, not feeling that he could deal with the shock after it being kept a secret all this time, almost ran away from home. However, after confiding in Chuck about his problem, Chuck made Dilton realize that Mr. Doiley cares about Dilton like a real father and that he would be heartbroken if Dilton ran away from home.

Moose Mason is Dilton's closest friend. Despite their completely different personalities, their closeness stems from a mutual understanding and how well they complement each other. Moose considers Dilton his "little buddy" and will do anything to protect him—anyone bullying Dilton would face Moose's wrath. In current stories, this relationship is increasingly being portrayed as symbiotic, with Dilton standing up in favour of Moose—in one story, he even pounces on Reggie Mantle in defense of Moose, when the latter was insulting Moose.

Dilton's other close friends include Archie Andrews, Betty Cooper and Jughead Jones. He has helped the gang many times with his various inventions or with his vast knowledge when they are faced with a problem. He is also willing to help his friends if they have difficulty in school. These are just some of the ways that Dilton manages to fit in with the gang.

Starting May 1989 and ending May 1990, Dilton briefly became the star of his own magazine named Dilton's Strange Science. The magazine featured Dilton and Danni Malloy, a red-haired girl and amateur inventor, who shared his intellect and interests and served as his best friend and love interest. They shared a number of humorous science fiction stories, involving their inventions.

Dilton features in a recurring one-page gag in the comics called "Open the Door, Dilton". There are three gags on a page, each covering two panels. On the first panel, Dilton approaches a door with a label saying what is inside. However, the words have a double entendre. On the second panel, looking into the room, he finds that the words do not refer to their usual meaning, which is what he was really looking for. For example:

Dilton also appears in other spin-offs with the rest of the gang, serving as the "brains" of the group as he does in the main series. He was a member of Archie's racing team in "Archie R/C Racers", and featured in "Explorers of the Unknown" as team inventor Gizmo. He rarely appears in "Archie I" or "Archie 3000", but in the former, he makes prehistoric discoveries, while in the latter, he makes use of the highly-advanced technology.

Like a stereotypical nerd, he proves to have little success when it comes to romantic relationships. This is largely due to shyness around girls. He also often makes for no competition against other, more muscular boys, who can beat him up or whom girls find more attractive. However, he has had a number of run-ins with girls, usually one-time characters created solely for the story.

Many girls are turned off by Dilton's nerdy traits and lack of athletic ability, which Dilton is quick to assume about any attractive girl. Some girls find his above average intellect appealing, though, often due to sharing their interests. He has also been seen in numerous stories where he tries to invent a female robot for himself with hilarious consequences. Also, in various stories, Dilton has been shown in relationships that poke fun at his below-average height, either being paired with a very tall girl or a girl as short as him.

In one story, Veronica Lodge became interested in Dilton after seeing his eyes without his glasses on. Dilton nearly switched to contact lenses to appeal to Veronica, but Veronica encouraged him to keep his glasses.

In some cases, however, his relationship with girls is portrayed in a more serious light. Besides the aforementioned Danni Malloy, Dilton has been known to occasionally date Big Ethel. In one story, the two revealed that they were targets for mockery (Ethel for being tall, Dilton for being short). They understood each other's feelings, and decided to go to the dance together.

In the late 1990s, Dilton began dating Cheryl Blossom. They were paired together online, without knowing each other's true identity, fell in love, met in real life, and decided to continue their romantic relationship, though this is rarely shown. Another relationship, formed a few years later, was with Brigitte Reilly, a talented young singer at Riverdale High.

Retrieved from "https://archiecomics.fandom.com/wiki/Dilton_Doiley?oldid=16936"
Community content is available under CC-BY-SA unless otherwise noted.