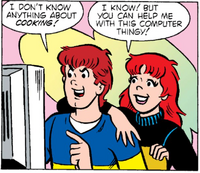 Jason Blossom is a fictional character of the Archie Comics universe. He is Cheryl Blossom's fraternal twin brother and, just like her, is a rich teenager.

Despite his dislike of townies and his claims of only dating rich girls, the main girl that he's expressed a romantic interest in is Betty Cooper, who (though certainly not poor) isn't exactly "rich." Betty has gone out with Jason a few times, though it was mostly to make Archie Andrews jealous -- despite that, Betty does at least seem to like Jason as a friend.