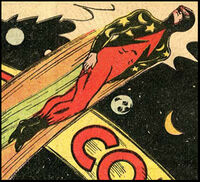 Bud, you've outlived your usefulness! Prepare to face your maker!

One might think there are two Comets, one who died in his his brother's arms, and another who came from the planet Altrox, to battle alongside The Mighty Crusaders. But, in fact, they're the same John Dickering.

As a science experiment, John began repeatedly injecting himself with a mysterious gas that was fifty times lighter than Hydrogen. The side effect gave him lighter-than-air leaping abilities and a pair of deadly eyebeams that could disintegrate anything he looked at. To prevent his optic rays from destroying everything he saw, he designed a visor shield out of glass.

Soon after discovering his new powers, he was hypnotized by a mobster and sent on a robbery spree. During a heist, he killed 10 people and police officer O'Hara. Because of this, he became a fugitive. When he regained his senses, he vowed to clear his name.

While on the run, he met newspaper reporter Thelma Gordon. Thelma believed his innocence and fell in love with him. She became his girlfriend and confidant. While the two did work together, she really wanted him to turn himself in so they could live normal lives.

When John was about to go to trial as a chief witness against racketeer "Big Boy Malone", the gang leader sent orders to kidnap him. A few days later, Malone's henchmen entered John's apartment and grabbed his visiting brother, Bob Dickering, by mistake. Before the gang could force Bob into their car, the Comet came to his brothers rescue, and was gunned down in a hail of bullets and mortally wounded. Afterward, Bob become a vengeful man and swore to carry on his brother's war on crime. He would later take on the name all law-breakers fear -- The Hangman.

Unknown to his brother and Thelma, John did not die. He was actually teleported to the planet Altrox where scientists were able to resurrect him. He would later marry the planet's ruler, Queen Naija, and continue living on the planet as their leader. Unfortunately, Altrox's atmosphere would slowly destroy the effects of the mysterious gas that gave him his original powers.

After Naija was killed, and his powers had completely vanished, John Dickering resigned as ruler of Altrox and returned to Earth to fight crime alongside The Mighty Crusaders.

Retrieved from "https://archiecomics.fandom.com/wiki/John_Dickering_(Earth-MLJ)?oldid=16731"
Community content is available under CC-BY-SA unless otherwise noted.