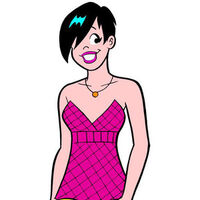 The character of Midge was designed by Dan DeCarlo and bears an uncanny resemblance to pin-ups he did for men's magazines just before he started working for Archie Comics. She was originally created simply to serve as Moose's girlfriend, debuting in Betty and Veronica #4 and Jughead #5. Her birthday is said to be on July 4, making her Zodiac sign Cancer.

She's nice, loving, and pretty. Like certain other characters, Midge actually evolved from a similar but different character. Originally, Moose dated a blonde girl named Lottie Little, who was replaced by Midge. For many years, Midge had a more petite build than the other girls in the comics, sharpening the contrast between herself and Moose. In later stories, however, she was portrayed as tall as her friends, with only her short dark hair to make her identifiable.

It was revealed in a story in the late 1980 that Midge's parents were getting divorced. Originally, she blamed herself, but Betty convinced her otherwise. It is implied that due to some counselling, the Klumps were resolving their issue, though whether or not the divorce was finalized was not revealed. But it can be implied that the family stayed together due to Midge's happiness at the end of that story.

Midge is Moose Mason's longtime girlfriend. Mostly, they are romantically devoted to each other. However, Moose is deeply protective of Midge, and if he feels the slightest bit threatened about their relationship, any boy seen talking to her will end up enduring his wrath. Midge's reactions to this varies from story to story.

She is occasionally annoyed by his violent jealousy and dislikes being avoided by all of Riverdale's boys because of this. However, because of Moose's possessiveness over her, she has a "taboo" appeal to her that many of the boys in Riverdale find irresistible. Despite her aggravation with Moose's overprotection of her, whenever another girl shows interest in Moose she reacts with the same jealousy.

At other times, Midge also gets Moose jealous by flirting with other boys. Reggie Mantle is also known to be in love with her. However, Midge, through no fault or intention of her own, usually sets Reggie up to be beaten up by Moose when he flirts with her. Occasionally Midge herself loses patience with Reggie. At such times, when Reggie shows up with a black eye or other evidence of having been harmed, Moose sees this and denies attacking Reggie—it turns out Midge did it.

Her closest friends are Betty Cooper and Veronica Lodge. Other girls she is friends with include Nancy Woods and Big Ethel. Her relationship with them is much more stable than with the boys, though Veronica's constant bragging gets on her nerves. Midge has even managed to have amicable relationships with a few males. This is mainly due to Moose knowing that some boys, namely aromantic Jughead Jones and shy Dilton Doiley, would never come between him and Midge. If he is unable to take her to a school dance, he usually insists that one of them take her instead. But somehow Reggie always comes in between.

In the Archie Marries Betty storyline, which takes place in a possible future, Midge finally tires of Moose's jealousy and breaks up with him for good. She subsequently becomes close to Jughead (who now owns the Chock'lit Shoppe), and they soon fall in love. Later in the story, it's revealed that they're now married, and Midge is pregnant with their first child. Whether these events will take place in the future that will eventually come to pass remain unknown.

Few of Midge's interests are mentioned in the comics. However, she is known to have athletic skills, and plays on the Riverdale softball team in addition to being a cheerleader. Midge and her girlfriends enjoy activities together, such as shopping at the Riverdale Mall. In an episode of "Archie's Weird Mysteries", we learn that she wants to be a stuntwoman after she graduates from Riverdale High.