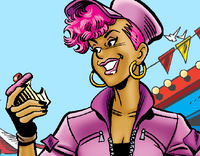 The newest rival to Jughead’s eating contest crown, Toni Topaz is a tough girl who sports pink hair with her purple jumpsuit. She finally met her competition at a cupcake-eating contest, where Jughead was surprised to discover that his sister Jelly Bean had run off. Toni offered her assistance along with her sarcastic BFFs Snarky and Hammer. Jug forfeited the challenge after finding Jelly Bean, and Toni still hopes to defeat him one day.[1]

Toni competes with Jughead at the Riverdale Winter Carnival cupcake-eating contest.[2] She later helps punish Archie for his "summer dating quota" by ordering a lot of food at Pop's and making him pay for it.[3] She is also a member of The Bettys, making her debut in China when most of The Archies were delayed.[4]