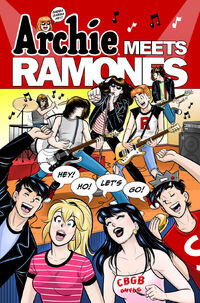 It was announced at this year's San Diego Comic-Con that Archie and the gang will be meeting the famous punk rock band the Ramones in a new crossover comic! Writers Alex Segura and Matt Rosenberg revealed that they are huge fans of the Ramones, and the Ramones were very enthusiastic when they reached out. Gisele Lagace, who has her own background in punk, will be illustrating.

The comic is scheduled to be an over-sized special issue with lots of great guest artists doing features. This release is conveniently going to coincide with the 75th anniversary of Archie and the 40th anniversary of the Ramones.

Retrieved from "https://archiecomics.fandom.com/wiki/User_blog:MrBlonde267/Archie_is_going_to_meet_The_Ramones?oldid=10494"
Community content is available under CC-BY-SA unless otherwise noted.