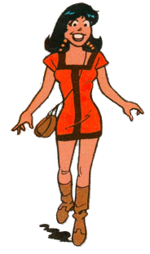 The concept for the Veronica Lodge character came from the creator Bob Montana's assignment to do a portrait of a real-life Lodge family. The real Lodges were wealthy and enjoyed the kind of extravagant life that is known to Veronica in the Archie series. Montana came up with Veronica's first name by using the name of eccentric actress Veronica Lake. Veronica appeared in Archie Comics shortly after Betty Cooper, Jughead Jones, Reggie Mantle, and Archie Andrews debuted.

Veronica has been called one of the most beautiful girls in Riverdale, and happens to be blessed with naturally good looks. In the comics, she is described as a brown-eyed brunette (her hair is medium-length with bangs). She stands at about 5'6" and weighs about 120 lbs (the same height and weight as her best friend Betty).

Despite her beauty, Veronica is seen as slightly vain, always concerned about her appearance and clothing. She is very fashion-conscious and buys only very expensive designer clothing which she is known to throw away only a few months after she has bought it. She is constantly driving her father crazy with her credit card bills, causing him to try and curb her excessive spending habits, but with no such luck. Veronica is sometimes good-hearted and kind; always ready to help out a friend in need. She often gives Betty her spare clothes she doesn't use and uses her wealth, connections, and other good qualities to assist her friends. She has contributed to various charity causes. However, when Veronica gets mad, she is unstoppable and impossible to calm down, despite any good things that may happen. She has a short temper, and usually only gets extremely mad when she finds out that Archie has been cheating on her with Betty. Veronica is very good at math and economics, and is thought to inherit her father's company when she comes of age. She is also an expert in the game of billiards, often trumping both Betty and Archie in the games they play at her home pool table. Being extremely knowledgeable about fashion, she jumps at whatever chance she gets to model clothing. It is hinted that she may be interested in getting a job which involves her designing clothes or running a clothing store. She occasionally does cheerleading, but is not portrayed as a cheerleader in all of the books. Veronica also enjoys traveling and is the basis for the book Veronica's Passport.

Relationships with Other Characters

Veronica's best friend is Betty Cooper, with whom she does almost everything, despite being at a constant rivalry for Archie's affections. Her other friends include Midge Klump, Nancy Woods, and Ethel Muggs; and all five of them enjoy shopping, talking, playing sports, and having slumber parties together. While she is said to be "popular", Veronica is not shown as hanging out with many girl friends other than those four. Veronica's main love interest in Archie Andrews, although many people in Riverdale are not sure why she chooses to date him when she could have her pick of any boy. In one comic, she states that it is Archie's hair colour and personality that make her attracted to him. Though Veronica is never stated as having a steady boyfriend, she does date Archie quite often, and rivals her best friend Betty Cooper for his affections. Archie, being unable to choose between them, creates the "love triangle" the three are involved in, in which Veronica is one third. However, Archie usually dumps Betty for Veronica, making her very happy. Veronica also occasionally dates Reggie Mantle because he can take her on fancy, high-class dates that Archie can't afford. Though she has been known to date a wealth of boys other than Archie, those relationships never lasted longer than one date. She was attracted to Kevin Keller before she found out he was gay. She and Kevin have remained good friends since then though. Veronica's relationship with Jughead Jones is described as less than friendly. In several stories it has been said that they "repulsed each other and always will". One of Jughead's favourite habits is "aggravating Veronica" because she gets mad at him so easily. Despite their differences, the two are friends who care about each other, although they may not know it. Dilton Doiley has been known to have a big crush on Veronica, although she never notices him. Marcy McDermott, Veronica's geeky cousin who loves "Space Trek", is very kind and helpful to her, although Veronica sometimes dismisses her as embarrassing and a geek. However, Veronica is Marcy's favourite cousin and the two have been known to help each other out when needed.