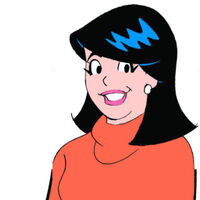 Vicky Mantle is the wife of Ricky Mantle, and the mother of Archie's friend/rival Reggie Mantle. In the comics of early 1990s, she appeared to be very strict, and concerned of Reggie doing his chores; this trait is also seen in the later comics. In her appearances, she is shown with dark brown hair.